How to Have a Healthy Vegan Pregnancy

While nutrition is always important for overall health, it’s especially so during pregnancy. A woman who is pregnant has increased nutritional needs in order to meet the demands of growing another living being, while also ensuring her baby is getting adequate nutrients to develop normally.

There are many benefits of going vegan and eating a diet of nutrient-rich plant-based foods. However, a vegan diet also has the potential to be lacking in key nutrients that are important for both mother and baby. An expecting mother who chooses to have a vegan pregnancy should seriously consider the implications that an unbalanced vegan diet could have on her and her unborn baby, as inadequate nutrition during pregnancy can cause adverse outcomes in general.

By taking the proper precautions and planning a well-balanced diet during a vegan pregnancy, mothers can be assured they are taking the right steps to get adequate nutrients that are important for both themselves and their babies.

Is It Possible to Maintain a Vegan Diet While Pregnant?

Absolutely! As with any diet, a vegan diet has the potential to be lacking in certain nutrients that are abundant in animal products. While it requires some education on the part of the mother, as well as careful planning to prevent nutrient deficiencies, it is very possibly to follow a vegan diet during pregnancy. 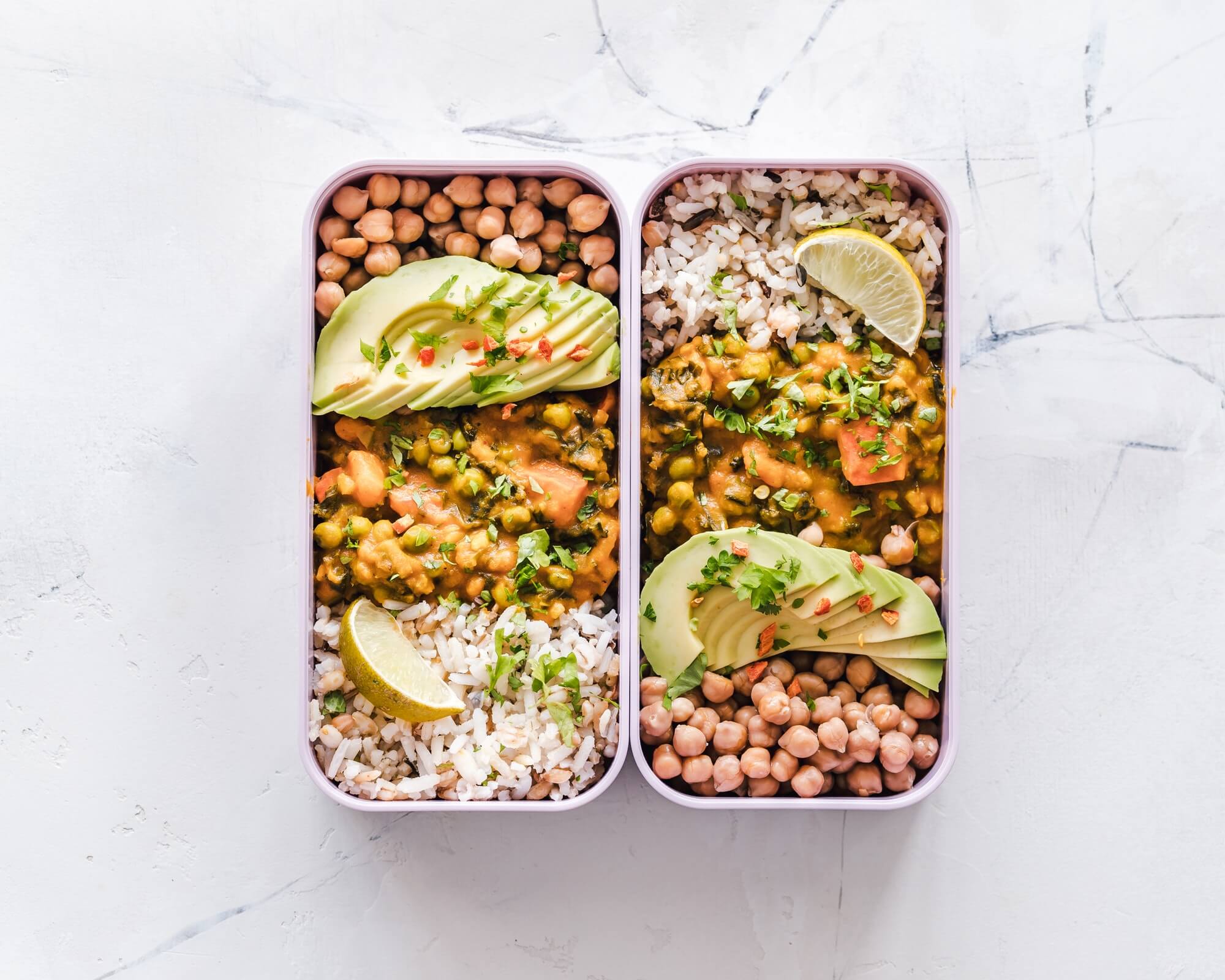 Benefits of a Vegan Pregnancy

A vegan pregnancy diet has the potential to be higher in fiber as well as certain nutrients due to the increased reliance on plant-based foods such as fruits, vegetables, legumes, nuts and seeds. In fact, diets rich in plant foods during pregnancy have been associated with reduced incidence of gestational diabetes and preeclampsia during pregnancy.

Other advantages of a vegan pregnancy include:

Risks of a Vegan Pregnancy

While there are many benefits of a vegan diet, there are some risks of maintaining a healthy vegan pregnancy which should be considered.

The risk of developing anemia due to low iron or vitamin B12 consumption may be higher for vegans than those who eat animal products, as these nutrients are naturally higher in meat and animal products than plant foods. Pregnancy and childbirth require a lot of iron, so the risk for anemia is already increased in pregnancy regardless of diet.

To reduce the risk of anemia on a vegan diet, focus on iron-rich foods such as legumes, nuts, seeds and leafy green vegetables. Vitamin B12 can be found in enriched vegan foods such as vegan milk alternatives as well as nutritional yeast. However, taking a B12 supplement is recommended if adequate amounts of B12 can’t be regularly consumed in foods.

If a vegan pregnancy diet isn’t balanced, there is a risk of nutrient deficiencies. For example, if adequate calcium isn’t consumed via foods such as tofu or calcium-enriched plant milks, then hypocalcemia (low levels of calcium) can occur and cause adverse outcomes for mother and baby, as well as increase the risk of osteoporosis in the mother later in life.

Since a vegan diet is associated with lower rates of gestational weight gain, there could be consequences of gaining too little weight during pregnancy, such as delivering a baby that is small for gestational age. Ensuring adequate calories are consumed during a vegan pregnancy can help support healthy levels of weight gain in the mother.

Necessary Nutrients to Intake During Pregnancy

Regardless of diet, there are certain nutrients that need to be consumed in adequate amounts by soon-to-be mothers during pregnancy. Many of these nutrients are required in increased amounts to support the growth and development of the baby, and overall health of the mother.

Calcium is an important nutrient for supporting bone health as well as healthy teeth. It also plays a role in maintaining a normal heartbeat, blood clotting and nerve signaling in the body. Calcium is the most abundant mineral in the human body, so it’s very important to consume during pregnancy!

Some calcium-rich vegan foods include: 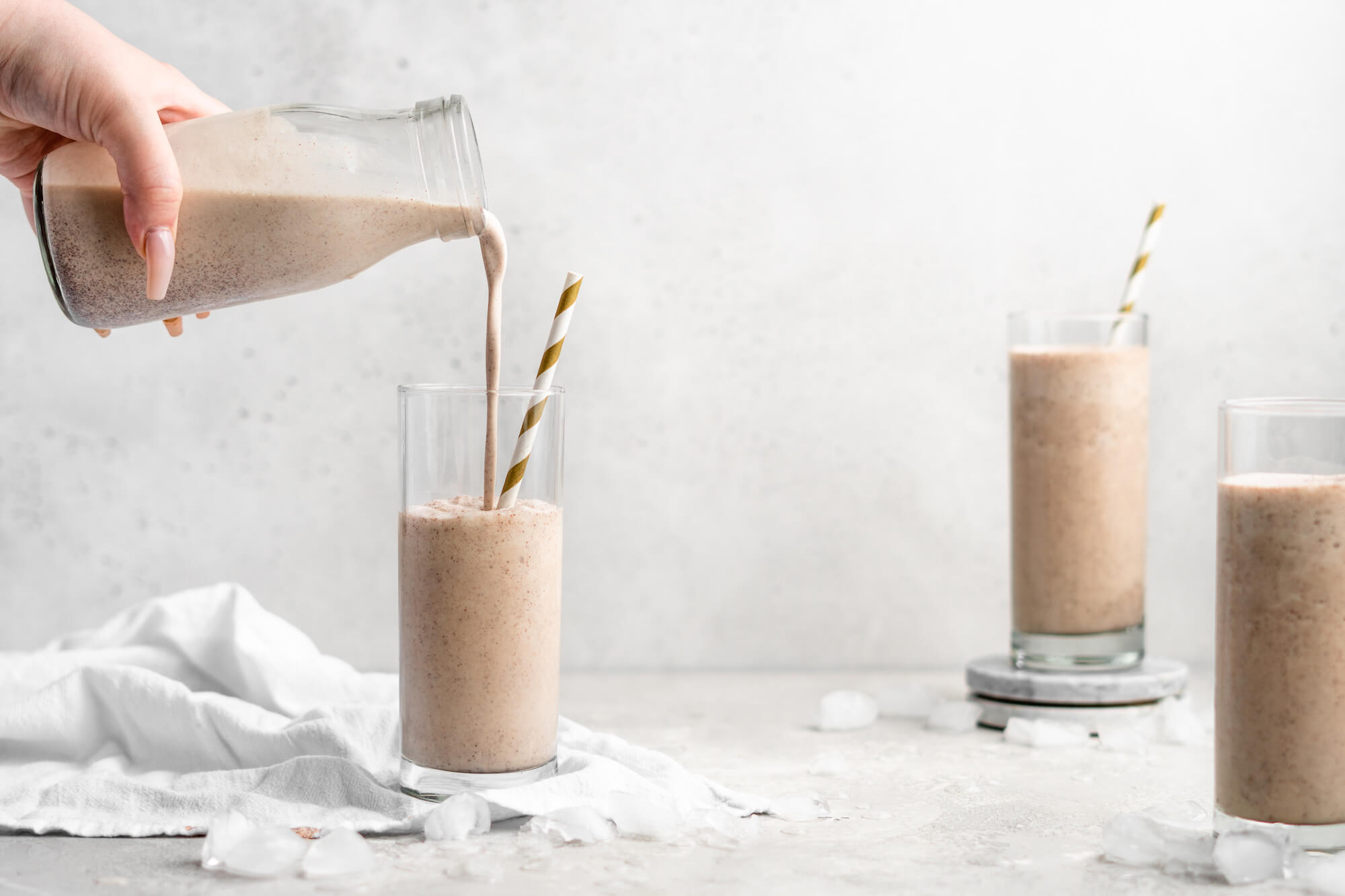 Try this creamy vanilla protein shake to get your daily calcium fix. Tip: Check that your plant-based milk is fortified with calcium.

Protein is vital during pregnancy as it helps promote fetal and uterine growth as well as maternal blood supply. The American Pregnancy Association recommends 75-100 grams of protein per day for pregnant women. If you’re wondering how to get protein on a vegan diet, here are some ideas of foods to include: 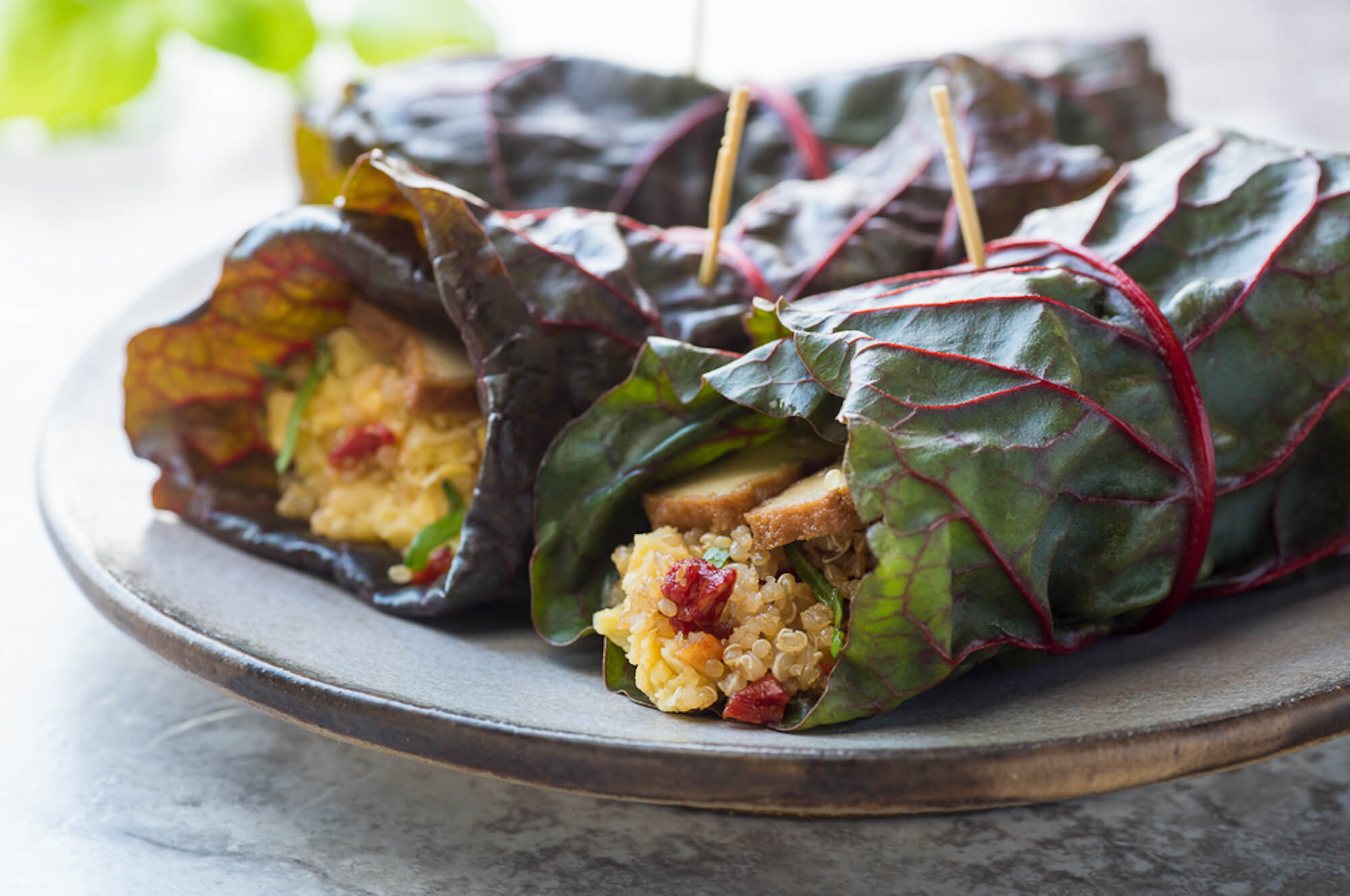 These tomato-basil chard wraps with baked tofu are a great way to boost the protein content of your vegan diet.

Iron is important for building red blood cells, which the pregnant woman’s body is doing a lot of due to the increased blood volume to support a new human being. Iron on a healthy vegan pregnancy diet can come from: 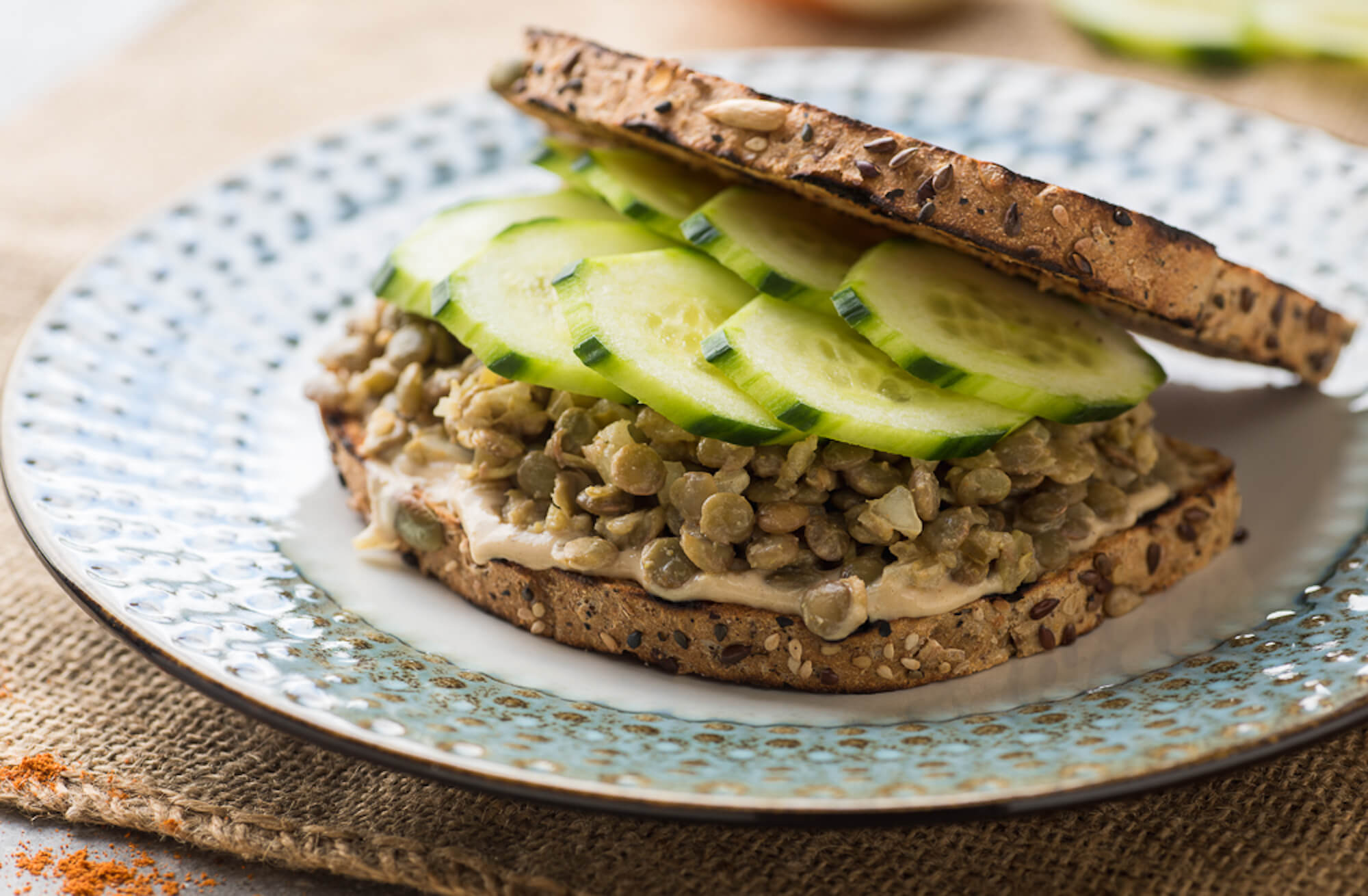 We combined the delicious flavors of falafel and spiced lentils to create this unique salad sandwich.

Vitamin D is equally as important as calcium for bone health, and it's essential in the functioning of a healthy human body. For your developing baby, it aids in bone development and helps to prevent preterm birth and preeclampsia.

Vitamin D isn’t found naturally in many foods, but foods are fortified with vitamin D to help meet the daily requirement. A vegan can get vitamin D from the following foods: 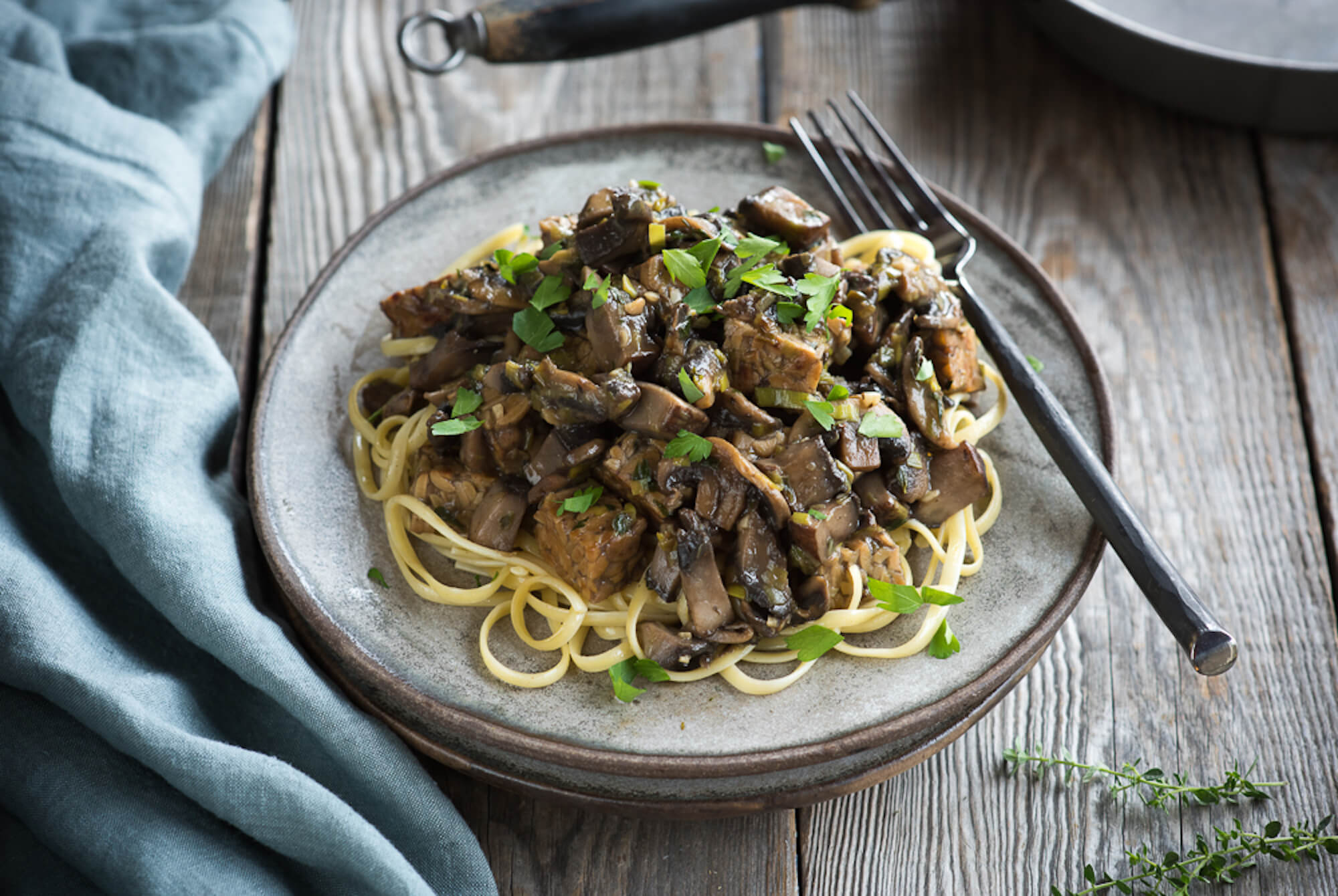 This mushroom and tempeh saute over pasta is a hearty meal that will help meet your energy requirments while eating for two.

If you're thinking about what to eat when expecting, there are some important factors to consider before pursuing a vegan diet during pregnancy. With proper planning, it’s absolutely possible to promote a healthy pregnancy by following a balanced vegan meal plan.

Important nutrients to focus on during a vegan pregnancy include protein, iron, calcium, vitamin D, as well as getting adequate calories to support healthy weight gain during pregnancy. Using our vegan meal planner can help take the guesswork out of eating right (for two), so the mother-to-be can focus on enjoying her pregnancy while reaping the health benefits of a vegan diet.

How to Create a Meal Plan for Fertility
By: Nicole Villeneuve
What to Eat When You're Expecting
By: Amy Height
How to Get Vitamins in Your Diet: What to Eat and Why It Matters
By: Amy Height

How to Create a Meal Plan for Fertility
By: Nicole Villeneuve
What to Eat When You're Expecting
By: Amy Height
How to Get Vitamins in Your Diet: What to Eat and Why It Matters
By: Amy Height